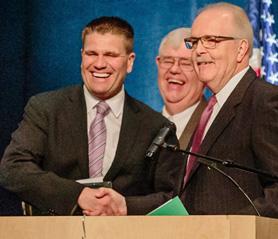 In early August 2017, Judge Agresti discovered a troubling situation involving a certain attorney in his court who had, due to health reasons, misrepresented 44 cases in various stages of bankruptcy. At the request Judge Agresti, Attorneys Cook and Foster accepted an appointment without hesitation and stated they would do whatever asked of them by the Court, and on a pro bono basis. They agreed to this extensive appointment knowing that it would require immediate attention and take a large amount of their time, much of which was unlikely to ever result in compensation, and out of concern for the well-being of the ill attorney.

Attorneys Cook and Foster and The Foster Law Firm donated 180 hours of their time, attending 53 court hearings, filed 97 pleadings and various motions and Chapter 13 plans. They successfully moved to reopen and vacate dismissal Orders in 15 of the cases which were dismissed solely due to the inaction. They successfully concluded 8 of the cases with 6 more well on their way to a successful conclusion. Others appear as if they will ultimately be successfully concluded but are not in a position to finally determine at this time.

In total, Attorneys Cook and Foster have thus far only received $7,744.84 for their services. They have little chance of receiving anything further since they agreed to the assignment with the understanding that they would not charge the various debtors any more than the attorney previously charged them, which in fairness to the ill attorney, was well below the market rate. This was agreed to so that the debtors would be made whole and not suffer any financial injury in addition to the "system pain" they suffered as a result of the attorney's failure to perform for them. Attorneys Cook and Foster expended 96.4 hours of uncompensated time, at a total value of $24,106.

If not for the willingness of Attorneys Cook and Foster to step forward and assist, there is no telling what would have happened. The Courts suspect that many, if not most, of the affected debtors would not have had the financial means to obtain new counsel. This would have inevitably led to many cases being dismissed, or closed without discharge, resulting in personal detriment to the debtors themselves at a very vulnerable time for them, not to mention the "black eye" for the Court as an institution and the bankruptcy system, generally.

By their public-spiritedness, Attorneys Cook and Foster have demonstrated the highest ideals of the legal profession and are worthy of commendation and recognition for the pro bono services they provided to the Court and the public at large. Congratulations!